Behind the scenes we call him Beans & Cornbread because we still don’t know his name.  That is ok with me.  I really try not to get to know my guests.  I prefer my relationship with them to be more professional than social. There are guests who love to have the owner give them special attention, there are those who dislike it, but most people don’t really care and I’ve always aimed to make the most people happy.  I rely on a hearty smile and nod whenever possible and, outside of serving guests, reserve my words for a thanks to everyone I see leaving.  Conversation is welcome though, and I don’t hold myself back when it happens. Eventually, I come to know the regular guests, even when I don’t know their names.  Due to the fact that I have owned four restaurants in three different cities, I’ve come to know a lot of guests, and often if I stop seeing them, I un-know them.  The thing about un-knowing someone is you really wouldn’t know you un-knew someone until you saw them again.  That’s what brings me to Beans & Cornbread.

I think Beans & Cornbread was a bit of a salty guy when I first knew him about 12 years ago.  We never had a conversation, but he was a once-a-week regular, always arriving sometime around mid-day.  A loner who walked with a bit of a limp, he looked like a fisherman or a wood cutter, tall, long faced, always wearing a cap over his gray hair and an open flannel shirt over his pocket T.  I must have gotten past him with the hearty smile and nod on and off for eight years or so, but then business took me completely out of my “home” restaurant for a couple of years.  I totally came to un-know Beans & Cornbread.

When I returned to home base I never really thought about him, but then one day a couple of months in I was walking through the dining room and came across him, sitting there with his black coffee, cornbread and beans just as always, and I was so pleased to see him that I let down my guard and engaged him.

“How are you?” I said.  And he looked at me a bit puzzled for a minute.  Maybe he had un-known me too, or maybe it was just a surprised look because I had broken a decade of silent smiles and nods, but finally he said “good good nice to see you” with a heavy Maine accent.

That was about it, but it broke the silence.  After  Beans & Cornbread left that day one of the servers said something along the lines of him being a grumpy old man.  I explained that he never had that reputation before, or at least I had not known.  I was assured that I would see.  Truth be told, he continued to be nice to me, but there was a darkness about him that was very real.  His “grumpiness” as I saw it was just an exaggeration of the heaviness that enveloped him.  One day he was especially annoyed because the beans and cornbread came before his coffee. I decided to deliver it myself when it was ready.

“That’s too bad, sorry about the coffee, we had to brew a fresh pot and the cook is a little trigger happy.” I figured he was talking about the situation regarding the coffee, but he filled me in.

“You see I got this bad foot, hurt it a long time ago at the yard and it never’s healed. They operated on it seven times in 15 years and it just gets worse every time.  Damn doctors don’t know shit from a hole in the ground and I’m about to just tell them to cut the damn foot off!”

“Wow, that is terrible” I agreed. He looked at me and shook his head, looked down at his food, and took a spoonful of beans.  “I hope they get it worked out for you” I added and left him to eat.

Beans & Cornbread was serious.  I didn’t see him for a month or so but I overheard a server conversation about someone getting their foot amputated and sure enough they were talking about Beans & Cornbread.  I felt as bad for the staff as I did for Beans & Cornbread.  What is he going to be like now? I wondered.  I asked how he was and they really didn’t know.  No one had really spoken with him about it, they just saw him leaving on crutches with no foot.  I explained that he had been suffering a long time.  In true restaurant fashion the subject of the conversation naturally changed to people who have fetishes for missing limbs.

I was anxious at the thought of having to speak with Beans & Cornbread.  I felt bad for him, didn’t know what to say, and feared he’d be even angrier about having lost his foot after struggling so long to keep it.  Then, one quiet afternoon I came strolling out of the kitchen and through the dining room and there he was at his favorite booth.  I couldn’t resist looking at his feet; he had on two boots.  I went over and asked him how he was.

“Terrific” he nearly exclaimed.  I could see he really was happy. He looked 10 years younger. “Remember how I told you about that foot, well I had it amputated.  It’s changed my whole life.  I can’t believe it!” He talked about how he had had some phantom pain for a while, but it all went away in no time and how he had mastered his new prosthetic foot the same day he got it.  He was so happy about it, and so was I, for both us and him.  A few days later he came in for dinner with a woman, they talked all evening and had a good time.  I was glad to go over and say hi to them both.

Whatever the original accident did to damage his foot, Beans & Cornbread had done worse to himself by not letting go of it.  Worse than the damage to his foot were the years of pain which had damaged his soul.  He carried that dream of saving his foot so long that he had come to un-know himself.   The foot was simply and swiftly cut off with a scalpel and bone saw and discarded like the waste that it was, but gone too were the anxiety and the sadness that came from a dream which could not be realized. 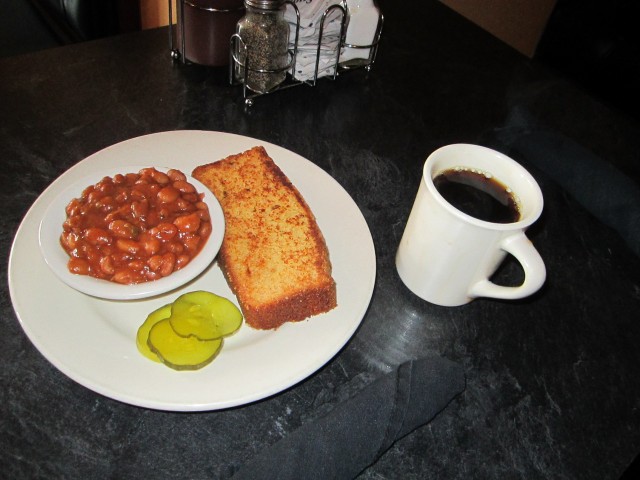